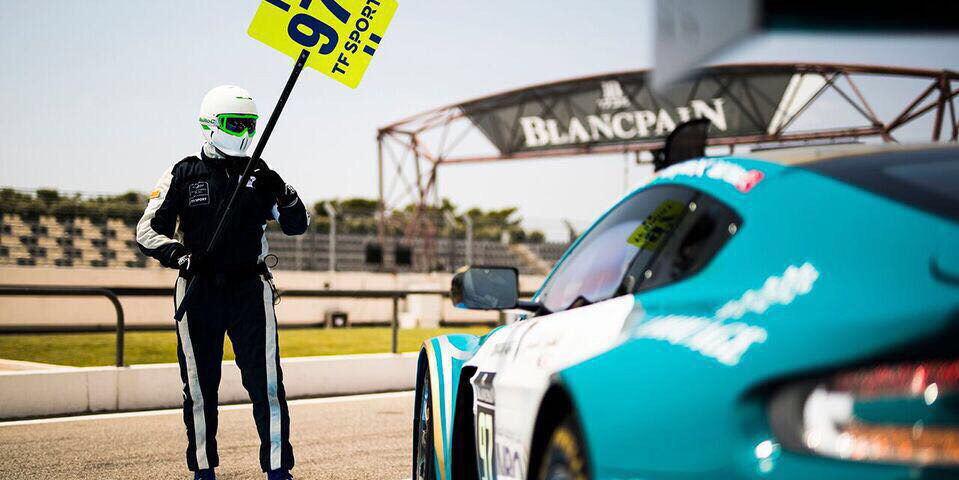 “It was a really good performance by everyone,” said TF Sport Director Tom Ferrier. “The second position means we’re still leading the Pro-Am championship and that’s always the objective. We could have won perhaps and we were certainly unlucky to get spun around by the Pro car in traffic, but overall, we can be nothing but happy with this result.”

Opening practice on Friday saw Yoluc complete a bulk of the running en-route to the eighth fastest time. Pre-Qualifying followed with Adam moving the #97 car to the top of the timesheets. Al Harthy concluded the successful session and the Friday running before qualifying where TF Sport secured fourth position in the Pro-Am class.

Al Harthy took the first race stint, immediately gaining position to run third as he set about chasing the leading #333 and the second-placed #11.

It wasn’t long before contact in the field brought out the first caution period. When the racing resumed, the field ran nose-to-tail once again with Al Harthy losing out to the #89 Mercedes only for another caution period to fly almost immediately following a huge off from Tomas Enge which triggered the first round of pit stops with just 40 minutes complete.

Yoluc took the second stint from fifth position but was soon on the move and up to third position and chasing the #89 car ahead. The Turkish racer wasted no time in moving second before handing the Aston Martin back to Al Harthy.

The Omani driver took over the lead when the #87 completed a drive-through penalty for a pitstop time infringement at the one-third distance mark. Darkness soon fell with Yoluc back in the car for the second time with three stops complete in the lead with a small cushion from the #77 Mercedes. Despite his best efforts, Yoluc was unable to fend off for position and dropped to second before light contact from Jamie Green #76 Audi sent him into a spin, losing three positions and a lot of time as a result.

The Audi driver was handed a 30-second stop-go penalty for the contact, but it made life harder for TF Sport as Adam took over with two-hours remaining with a minute deficit to try and close down.

Adam, who showed sensational pace at Monza, was soon on the attack, quickly disposing of the #333 Ferrari to run in second position and setting a TF Sport’s best on lap 114 of 1:58.927, half a second quicker than the leading #77 Lamborghini. However, the deficit proved to be too much with Adam eventually finishing a fighting second.

TF Sport are next in action in the British GT Championship as the series heads to Spa Francorchamps 7-8 July.