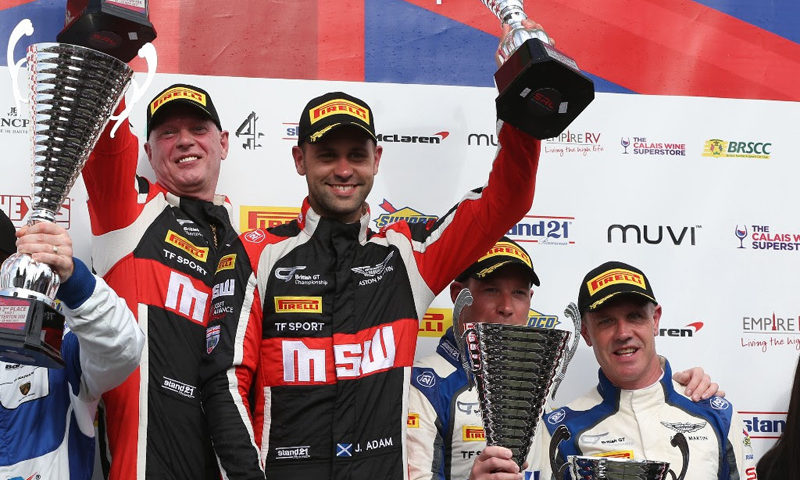 TF Sport scores a sought after victory for the first time this season at Snetterton, Norfolk, equalling Jonny Adam’s win tally to the British GT Championship’s record of 11.
The team endured a difficult first race, with the #1 scoring vital points for the championship from fifth and the sister entry #11 struggling from tenth after contact at the end of the first stint.

Starting from P3, Jonny Adam took the start looking to capitalise the success penalties from the cars ahead. After a clean start saw Adam putting himself P2 and Barnes on P6 from seventh, the team focused on managing the gap, maintaining it under 10 seconds at the time of the stop behind the dominant Lamborghini.

Misfortune struck for a second year in succession, when a stalled Ginetta held Jonston in the pits, handing over the lead to Barwell Motorsport. Failing to complete the 70s minimum pit stop time, the #33 had to serve a drive-though penalty in the closing stages of the race, promoting both Aston Martin Vantage V12 forward into double podium positions, with the #1 claiming the lead of the race.

TF Sport Director Tom Ferrier
“Tough weekend for us. We have struggled with handling issues all weekend. To come away with a win and a third is prove of a great team effort and well deserved for all the hard work put in. We will be testing on Tuesday at Silverstone, and making us fast again will be our aim so we can fight hard at the next race in two weeks”

Jonny Adam #1
“The car was good, we’ve done a lot of changes over the race weekend trying to get to the bottom from what it was a small issue. We’ve been waiting since May last year to get another victory and hopefully our comeback for the championship starts now”

Derek Johnson #1
“We struggled really (this year). Oulton Park was good for us, the qualifying wasn’t, but the race was in the wet and we were good in the wet. We struggled in Rockingham and we struggled all weekend here, we’ve been changing the car from one end to the other and we just went radical again for the race and it obviously worked, so we struggled to the very end to find it and then we shown what we really got”

Next
Round 6 of the British GT will take place in two weeks time in Silverstone.